Since version 4.5.0 Windows installations have been possible with orcharhino. This means that in addition to numerous Linux derivatives, all newer Windows versions from “Server 2012” onwards can also be installed and managed with orcharhino.

The finished Windows Host can be created at the push of a button. However, the following questions must first be answered:

Microsoft offers a free tool to easily create a Windows boot image. The Microsoft ADK (Assessment and Deployment Kit) is available as an open-source download.

After installing the kit, a rudimentary WinPE 64Bit boot image is created with the command “copy amd64 c:”winpe “.

This simple boot image can be extended according to your needs. The addition of additional language packages as well as software (e.g. wget) and drivers (network drivers or HDD drivers) is thus possible.

Important: The more drivers you add to the image, the larger it will be (additional drivers are often several gigabytes in size). The advantage of this is that the boot image can be used both directly on a physical server and on a hypervisor such as VMware or Hyper-V.

With good preparation, this can be used universally for any Windows installation.

Two files are required to boot Windows systems. These are located in the orcharhino TFTP folder: 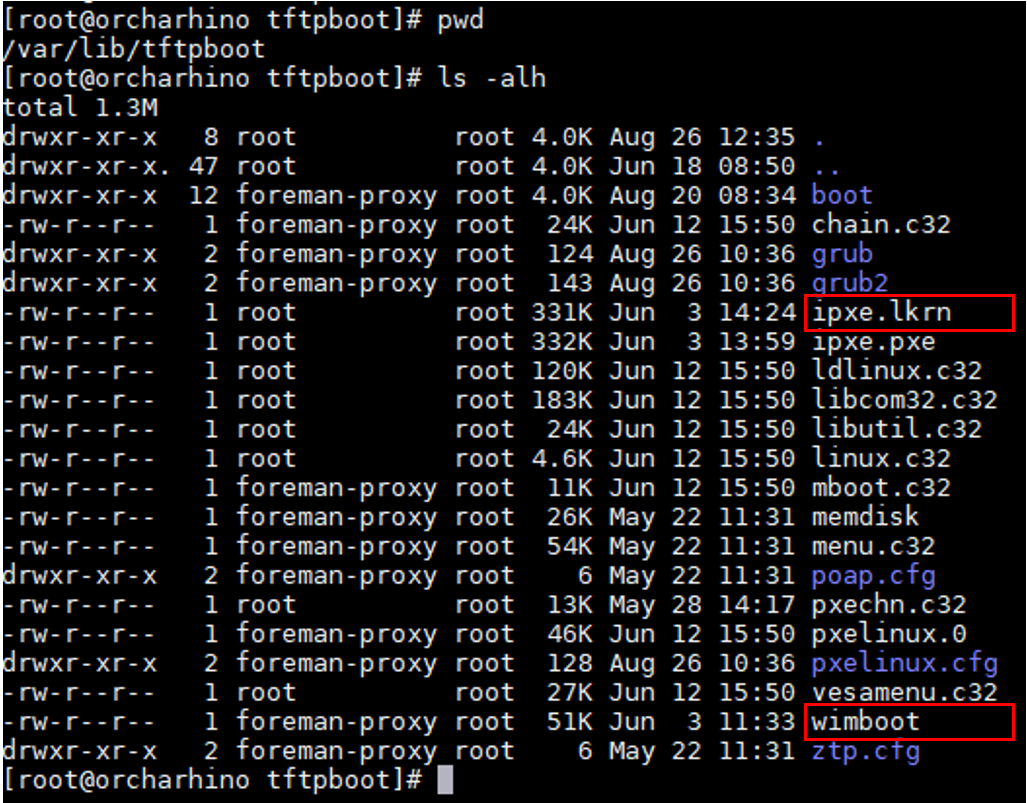 Both files can be downloaded and used from the open-source project iPXE page. Source:ipxe.org

Now it is generally possible to boot the previously created WinPE via TFTP with orcharhino. The necessary orcharhino templates are explained in the following:

After all preparations have been completed, the Windows ISO files are loaded onto the orcharhino and made available via the web (http).

For this purpose the original Windows DVD or the ISO is mounted on the the orcharhino and the complete content is copied into a web directory. For example to: #/var/www/html/pub/images/Windows/{version}

In the last step, the original Windows Boot.wim must be replaced once with the previously created universal boot.wim.

The corresponding orcharhino boot template should have set the type “PXELinux Template” and have the following content.

Figure 3 – Contents of the PXE Template

After the boot start of the universal WinPE, this automatically attracts another orcharhino template. Here, the hard disk layout can be determined directly or via snippets. Drivers can be reloaded or installed. Furthermore, the definition of the Windows version to be installed is possible here. Currently, the following versions are supported:

It is important to know how this mechanism works in Windows. Windows uses a file called “unattended.xml” that must be in the “C:-Windows-Panther” folder when the system is first started.

This XML can be customized via an orcharhino “provisioning template” and passed to the Windows system during boot.

In this ATIX template the following features are executed during the Windows installation:

After all preparations have been completed, all orcharhino templates have been created and the corresponding “Installation Media”, “Operating Systems” and “Host Group” have been configured in orcharhino, the first Windows deployment can be started.

On September 28, 2019, ATIX has held a webinar on the topic of orcharhino with a focus on Windows installation (incl. live demo). If you are interested, you are welcome to watch this orcharhino webinar on our YouTube channel. In the live chat you can of course also ask us your questions.

The Tentacles of orcharhino – Deploying with Many Subnets
Scroll to top